Plastic Baby Bottles – Are Any Safe?

Posted at 05:00h in Hazards by Malcolm Romano 0 Comments
0 Likes 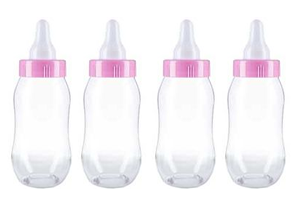 Heavily pregnant with twins, I waddled my way to the baby bottle section of the local baby store; surely this was going to be an easy purchase. In and out – or so my husband thought as he patiently waited in the car. Despite the number of shelves that greeted me upon my arrival, I soon realised they were all made of plastic. As a naturopath and building biologist my instincts were to go for glass, but the sales assistant informed me she’d have to order them in. I subsequently bought two plastic bottles and ordered two glass bottles anyway. Not content that plastic was the way to go, I subsequently embarked on a ‘quick’ search on the internet only to find that the mounting evidence against polycarbonate baby bottles was already in full swing. Weeks passed as I peered through scientific journals. The outlook on plastic baby bottles was pretty grim, even in 2006. This article is about what I found.

Despite the recent concerns regarding the use of polycarbonate baby bottles and its consequent ban in Canada and several states within the USA, it still accounts for the majority of baby bottles sold in Australia. The health concern associated with polycarbonate plastic is the monomer used in its manufacture – bisphenol A (BPA). BPA mimics the female hormone oestrogen. It affects the nervous and reproductive systems and has been linked to cancers, impaired immune and brain function, obesity, diabetes, heart disease, hyperactivity and early onset of puberty among other problems (Environment California, 2007). Could this explain the reason why some girls in western countries are starting puberty from as young as eight (the average age was 16 in the early 1900s)? It is found in polycarbonate baby bottles, some toys, drinking water bottles, pacifiers, teethers and in the lining of most tin food. This is of particular concern to children who drink from baby bottles made from polycarbonate and those whose diet is high in canned food. In April 2008, as a result of BPA’s concerns, Canada introduced legislation to ban the sale and importation of polycarbonate baby bottles. This year, for the first time, the US Food and Drug Administration raised concerns about BPA’s impact on the brain, behaviour, and prostate gland in babies and young children and have taken steps to ban its use in baby bottles, sippy cups and cans. Many other countries look set to follow; Australia does not appear to be one of them.

Are There Safe Plastics?

By the 1980s, plastic baby bottles essentially replaced the traditional glass bottle because they were light weight and didn’t break. Plastics can be differentiated by the recycling number (resin identification code) on the product. For example, #1 in a triangle on drinking water bottles is made from PET (polyethylene terephthalate). Most plastic baby bottles including – polyether sulphone (PES) and polycarbonate (PC) are rarely labelled and are #7 plastics. The problem with plastics is that they may contain a range of additives that provide it with varying properties such as heat resistance, hardness, flexibility, resistance to degradation and transparency which are not evident by the recycling number. Consequently a plastic bottle can be made from a variety of copolymers and still legally be marketed as only having one type of plastic (Sax, 2010). The degree to which contaminants leach from plastic differs depending upon the copolymers found in the plastic, whether it has been recycled, the temperature and duration of storage, the acidity of the product and how it is manufactured (Sax, 2010). Unfortunately the only way to determine what is in the plastic is to ask the manufacturer for a Certificate of Analysis that has been certified by a NATA accredited laboratory. Believe me, it would be easier to extract hen’s teeth!

As a result of growing public concern about bisphenol A in polycarbonate baby bottles, manufacturers have been eager to find a suitable substitute. Polyether sulphone (PES) has become the plastic of choice because it is not only tough and stable at high temperatures it is free from BPA. However a closer look at the manufacturing of this plastic raises further questions. PES polymers have a high glass transition temperature which means they are very stiff right up until they decompose (Dpt of Polymer Science, University of Southern Mississipi, 2005). Consequently additives are required in order to give it specific properties. Simply put, PES is produced by the reaction of a monomer (diphenol) and bis(4-chlorophenyl)sulfone (Wikipedia, 2010). The most common monomer used by manufacturers is bisphenol S. Granted this is not BPA however there is insufficient evidence amongst the scientific literature to prove that bisphenol S is safe and without risks to a child’s health. My concern as a building biologist is that many western countries including Australia work on the premise that until there is concrete scientific evidence that an agent can cause harm, it is assumed to be safe. This underlying presumption of ‘innocent until proven guilty’ enables chemicals like bisphenol A suspected to be harmful, to undergo extensive scientific trials and judicial reviews before they are banned. Products subsequently remain on the market where they may continue to affect our children’s health. Rather we should be implementing the precautionary principle whereby the onus falls on the manufacturer to prove that a plastic is safe before it is introduced into the market. The European Union enacted the precautionary principle in 2000. I am perplexed why other countries like Australia have not yet followed?

In reality there are many grades of PES, which begs the questions – where does the manufacturer of the plastic baby bottle buy the PES resin from and what additives are used? Unfortunately you are unlikely to ever get the answer to this question. Consequently I am reluctant to recommend this type of plastic until further research can prove that it is completely safe for children.

Polypropylene (PP) is an alternative plastic baby bottle that is also available. In light of the fact that it is very brittle, additives are commonly used. Furthermore the melting point is quite low which means it needs to be chemically sterilised (not boiled or steamed) which is why I am reluctant to recommend it as a baby bottle; however it is a good alternative for sippy cups.

From a building biology perspective, glass is the ideal baby bottle as it is recyclable and does not leach harmful contaminants into the breast milk or formula even when exposed to direct sunlight. The modern glass baby bottle has been extensively used in our society since 1910 and has provided generations with a good and effective method to store and supply breast milk and infant formula. Of course breast feeding is the ultimate choice but for many reasons – medical and otherwise, it is simply not viable for all mothers (myself included). As a building biologist and mother, until there is sufficient research to prove the safety of plastic, glass is the only sensible choice.

National Toxics Network (2008). Environmental Threats to the Health of Children in Australia. The need for a national research agenda.
(Online). Available: www.ntn.org.au/ntndocs/envthreatstaustkids.pdf