Posted at 01:36h in Hazards by Malcolm Romano 0 Comments
0 Likes

Listen to my recent interview on “5G Technology: is it worth the risk?” FX medicine podcast HERE

5G is a new generation in mobile wireless communication that will give rise to the fourth industrial revolution (Industry 4.0) that promises greater reliability, massive connectivity, faster network speeds, better coverage, low latency, mass cloud computing and autonomous systems incorporating artificial intelligence. This will dramatically change the way we live, work and travel as everything we own and buy from our cars to appliances will contain antennas and microchips that will be connected wirelessly as part of the ‘Internet of Things’ (IoT).

2017 to coordinate the implementation of 5G networks across the country in 2019/2020 in order to become a ‘first-adopter country’ in order to gain a competitive advantage internationally with the aim of providing data coverage to more than 99% of the population (Australia, 2017b). Remarkably, there are no health experts that have been appointed to the working group. By 2025, 5G is predicted to cover a third of the world’s population.

5G is a new generation in mobile wireless communication that will give rise to the fourth industrial revolution (Industry 4.0) that promises greater reliability, massive connectivity, faster network speeds, better coverage, low latency, mass cloud computing and autonomous systems incorporating artificial intelligence. This will dramatically change the way we live, work and travel as everything we own and buy from our cars to appliances will contain antennas and microchips that will be connected wirelessly as part of the ‘Internet of Things’ (IoT).

High frequency millimeter wave radiation was developed by the military as a weapon and in crowd control.

I have several concerns associated with the rollout of the 5G network:

What progressive cities/countries are doing about 5G.

My biggest concern is that there hasn’t been much research done on the biological effects on high frequency technologies such as 5G.” David Mercer, University of Wollongong

The Department of Communications deployed the infrastructure in 2019 for the rollout of 5G network in 2020. This involves millions of low powered mobile base stations “small cell antennas” every 50 to 250m in high density populations to ensure adequate coverage. The close proximity of antennas is required because 5G uses high (microwave) frequencies which can only travel a small distance and is easily influenced by its surrounding (like trees which need to be cut down). Small cells transmit data via direct focused beams of energy (beam forming) to a specific area rather than dissipate the available power over a larger area (like the existing mobile phone base stations). This network will use phased arrays, ie the cell tower will have an array of thousands of antennas that will have an effective radiated power of up to 100,000 watts aimed at you and everyone else using a cell phone. In addition the 5th generation of cell phones will contain dozens of antennas all working together to shoot a beam to the nearest cell tower (Firstenberg, 2019). These multiple antenna segments are referred to as Multiple Input Multiple Output (MIMO) which allows information to be transmitted simultaneously (Australia, 2017a). Cells will be fitted to existing infrastructure such as street lights, power lines, tram poles, bus stops, railway stations, advertising panels and may also be installed inside residential and office buildings. In addition to the small cell antennas, the infrastructure also requires the deployment of twenty thousand satellites in the earth’s magnetosphere and ionosphere and there are concerns this may interfere with the terrestrial radiation (Schumann’s Resonance, earth magnetic field) which life has evolved upon. 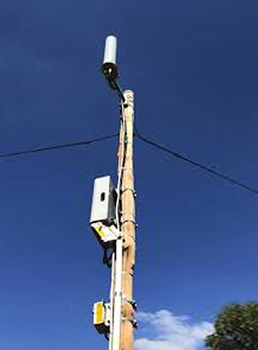 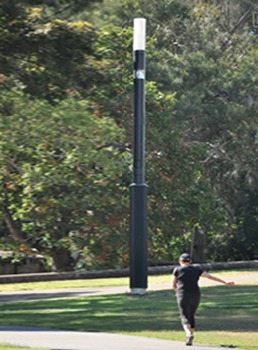 To find the 5G towers in your location:

5G trials have already commenced in Australia, with each of the main carriers working with mobile equipment suppliers in testing the application and limits of the technology. It will be initially used to carry data traffic in high-usage areas such as central business districts (CBDs), shopping malls, transport hubs, and sporting venues, where 4G networks are under strain. From there, it will spread to rural communities, until it has covered the entire nation.

Telstra is planning a 5G mobile service that will support both sub 6 GHz and mmWave spectrum, and ran its first 5G field trial on the Gold Coast in September 2016 and during the 2018 Commonwealth Games. Shortly after, Telstra launched the ‘5G Innovation Centre’ on the Gold Coast, including the world’s first precinct of 5G-enabled Wi-Fi hotspots, Australia’s first 5G Connected Car, and the world’s first end-to-end 5G non-standalone data call on a commercial mobile network. Since then, Telstra switched on 5G technology across selected areas of the Gold Coast, making it the first telecommunications provider in the country to be 5G ready. In addition, Telstra signed deals with smartphone manufacturers to bring new 5G phones “exclusively” to its 5G mobile network. As soon as compatible 5G commercial devices are made available by the mobile handset and device manufacturers, Telstra’s 5G network will be ready to receive them.

Optus have also successfully completed 5G network trials in Australia, switching on its 4.5G network in February 2017, followed by the addition of Massive MIMO and three-cell carrier aggregation to 4G. Following this, Optus successfully commenced a trial of the technology in Newcastle in 2017, which employed 4.5G technology, the organisations’ precursor to 5G speeds. Optus announced they will begin rolling out a 5G fixed network this year in selected metro areas, following successful trials with speeds 15 times faster than current technologies. Optus have launched a live 5G site in Sydney, and 47 more sites are planned to be online in 2019.

Vodafone commenced trials of 5G networking in 2016. During initial trials, conducted in partnership with the telco’s 5G technology partner Nokia, the company recorded clocking speeds of 5 Gbps over 200 MHz of spectrum in its first local live recordings of the technology.

How to test wireless technologies

Testing electromagnetic fields is challenging because you need to know the sources of radiofrequencies, how the built environment and surrounding objects may influence the fields, and use accurate meters that can pick up peak exposures in fractions of a second. The optimum way to test is to employ an ACES-certified Building Biologist to assess your home as they have undertaken 250 hours of nationally accredited training, and use expensive equipment (~$10,000). For a list of building biologists, go to www.asbb.org.au. If however this is not viable for you, an economical option is to purchase an accurate omnidirectional radiofrequency meter like the Safe and Sound Pro Radiofrequency digital meter ($695) or Safe and Sound Pocket Radiofrequency meter ($395). Effective frequency range is 200 MHz to 12 GHz). These meters will enable you to scan your home for radiofrequencies (used in initial rollout of 5G and wireless technologies) and compare the readings to the Building Biology limits.

HOW TO TAKE ACTION AGAINST 5G